I am not going to cry! 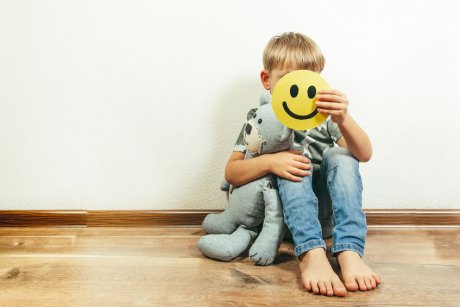 I am not going to cry!

„I am not going to cry! I don’t cry!”, my son blurted out with pronounced disdain.

That surprised me. I am a psychologist and a mom, and have raised my son – I thought – to invite his emotions, invite his vulnerability as a young man in the world. How did he come up with this idea that crying is somehow “bad”, something contemptuous?

Talking with my son did not change his view. This was not a slip of the tongue. This was not a mistaken throw-back statement from a previous century. This was a reflection of how he as a 21st century adolescent had made sense of himself and the world around him. While talking explicitly with him about this, it became clear that it wasn’t just crying that was the problem. All kinds of emotional expression had become signs to him of being a “baby”, of being “weak”, of being “bad” or having something “wrong” with him. And there was nothing I could say to change his mind about that.

I suppose I should not have been as surprised as I was. These ideas of his seemed so old-fashioned, and yet, when we look at the attitude towards emotion in the world today, we continue to see remnants of very old ideas dressed in new language. For example, we live in a world where there really isn’t much talk about understanding emotion itself, but where there are crowds of voices discussing the regulation of emotion. Teaching the control of emotion has top priority. And we seem to be arguing that our emotions are to be controlled with the “right” thoughts. When we have emotional problems, we seek out cognitive behavioural therapists who assure us that thinking right leads to feeling right. We go to classes to help us “calm down”, “stay relaxed”, “be positive” and we tell our children to do the same. The message behind this new version of “mind over emotion” is not really so different from the age-old view of emotion that has accompanied us throughout our dualistic Western tradition. In fact, in some ways, we are in a kind of resurgence of the Age of Enlightenment, where we now laud the power of “cognition”, instead of the 18th-centruy version of the word, “reason”.

This predominant focus on cognition is so deeply entrenched in our way of talking and thinking about ourselves and our children that to question it usually doesn’t occur to us. What else is there? How else can we understand ourselves? How else can we help ourselves?

Ingrained in us is the idea that emotion is inherently a potential threat. And this is phenomenologically understandable: An emotion grips us. Emotions – or the passions (passio (latin) = to suffer) – happen to us. We find ourselves moved. We are “affected”. But somehow, we are not supposed to let ourselves be affected. Not “too much”. Especially when it comes to particular emotions. Frustration, for example. Fear. Or – as in the case of my son – feeling hurt. To feel in the grips of an emotion is to feel to some extent powerless. Not the “master” of oneself. At the mercy of. Vulnerable. And this is at the very least unsettling. Especially when we live in a society that so highly values agency, independence, strength, composure. The flip-side – passivity, dependency, vulnerability, emotional upset – is to be condemned, shamed, even pathologized. My son obviously understood that.

My son also understood that the traditional answer to the “problem” of emotion is to make it go away. Stop it. Calm down. Control yourself. Of course, this is often not successful. It is, in fact, notoriously unsuccessful. This failure to control ourselves then serves as a constant source of shame and guilt – which are emotions that again must be combated, “talked” down. A vicious circle. Even when the control of emotion IS successful, it often has highly problematic psychological consequences - as Sigmund Freud outlined for us in detail! Towards the end of his life, Freud came to the conclusion that the consequences of suppressing emotion were a necessary “evil” given the threat that our emotions posed to the upholding of culture and our civilization. After a career of looking into the darkest shadows of the “emotional” soul, Freud ultimately concluded that reason must prevail.

But what if we understood emotion quite differently than this oppositional, dualistic view. What if we saw emotion as being, not an inherent threat, but a guiding, animating force. Not an enemy, but an archetypical response that has evolved over millenia to ensure our physical and psychological survival. What if we saw emotion as having an essential function for us social animals: moving us to hold on to our attachments when those attachments are threatened, moving us to repair our attachments when something isn’t working, moving us to be cautious when our attachments are in danger. Emotions, then, would be something of value to us. Life-preserving, life-enhancing, even socially upholding. Something we would want to understand, explore, develop, support. Not something we want to just go away.

And what if we saw emotion, not as an adversary of “reason”, but as the “womb” of reason, where the development of the rational mind is a kind of “child” of emotional development, not separate and alien. What if we then saw self-control not as an act of mind over emotion or of having the right thoughts, but as an emotional act – a natural consequence of an inner emotional conflict? Would we then not want to focus on emotion with our children and support their emotional development in order to help them become “civilized” adults eventually capable of the impressive feats of reasoning unique to our species?

Now, I thought I was doing that, but my son’s outburst told me that inspite of my best efforts, he was clearly not espousing this view of emotion. I wondered if perhaps I had given him mixed messages – the older dualistic view of emotion sits so deep within us. It is hard to be truly free of it. We surely slip into some version of “stop it” somewhere along the way as parents. But was it really that? Perhaps it was the messages he got in school from other students, from teachers or from the overbearing presence of the media. Perhaps the weight of the centuries in these messages and their consistency over time and context was too powerful, overshadowing me.

Of course, the explanation may be something completely different. Perhaps it was because he was not yet able to contain the vulnerability and intensity of his emotions. There is something inherently overwhelming and sometimes frightening about certain emotions. They can feel like they will engulf us, which is threatening to a budding, adolescent self. Perhaps for this reason he needed to “banish” his emotions. (Perhaps this is at the core of why emotions have had to be “banished” over the centuries.) In the case of my son, I would then need to wait for emotional maturation and emotional experience to come to the rescue. And offer more “play time” with emotion. Which is what I did.

Several years have passed since my son confronted me. You may be asking yourself if anything has changed. Well, he is no longer in school. And he has had a lot of “play time” with his emotions. If you listen to him in his room, chances are you will hear him playing guitar and singing. You might hear “Hurt” by Johnny Cash or “Smells Like Teen Spirit” by Nirvana.  What you are hearing is my son expressing his vulnerable and intense emotions in the safety of song. He may not yet be able to talk about it. But he is singing his tears. He is playing his anger. He is in the process of befriending his emotions. In his way. At his pace. And this puts my mother heart at ease.